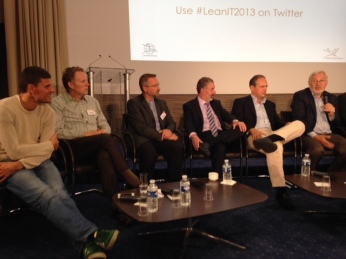 The most recurrent question of the European Lean IT 2013 conference was at the heart of a dedicated panel : how does Lean IT positions itself in a world dominated by Agile culture ? There was (from left to right) Pierre Pezziardi, Steve Bell , Hakan Forss, Mike Orzen, Michael Ballé, Daniel T Jones and not appearing on the picture Regis Medina, Takashi Tanaka, Laurent Bossavit, and Antoine Contal (moderator).

A wonderful panel that has launched many thoughts for #hypertextual …

As a convicted agile practitionner and a Lean coach, Antoine kicked the panel off from a perspective he is familiar with, as many of his clients ask him the question : We have been doing agile for 2 years and now plan to do Lean. What would you recommend ?

There has been an interesting convergence amongst the speakers on the difference between Lean and Agile. The question has been reformulated in this terms by Pierre, the first to talk. Agile has been mostly tackling the issue of software product development efficiency while Lean is more interested in the full value stream, from the customer need up to the delivery of the service or product (or From Concept to Cash as the Poppendieck have named their second Lean Software Development book).

Many mentioned the observed limit of agile with operations, a limit the DevOps community is now trying to tackle. So, many speakers agree that the idea would be to use Lean to expand agility on the whole organisation. An idea both Steve Bell and Yves Caseau evoked in their respective keynotes and that I’ve mentionned a while back on this blog.

Daniel Jones had this stunning comment about self-organized team : “It is just a way agile teams found to protect themselves from the Taylorist organisation. But it misses the point”. Antoine Contal mentioned that agile loves this concept that makes managers and CIO nervous.

A point Mike Orzen underlined stating that Agile introduced two problems in the organization : a factory in the factory and a subculture, this is the reason why we should start with Lean. I don’t have any problem with starting with Lean but I find the statement rather shallow. Agile is far more than a sub-culture now. The vast majority of software development projects are now carried out using Agile methods (maybe not Agile mindset, though) so I would rather call it a macro culture that is now turning into some kind of standard. Besides, Lean also has a culture. More specifically, looking at Schein cultural axis, Lean score at the highest point on the relation to reality and truth axis : full pragmatism (another difference with Agile by the way who doesn’t rank so high probably).

One point that was not mentioned but that Antoine keeps on saying : agile aims at building better teams, while lean is serious about building the best team.

Both Michae Ballé in the panel and Régis Médina in his keynote insisted on the dIfference where Lean develops people and agile develops software.

Which brings us to the most enlightening moment for me of the conference when Regis asked this question :

This is a wonderful question, a question I wish I could have been wise enough to ask myself during all this time. We all use the same examples of Google, Facebook, Twitter, LinkedIn, Amazon etc … as some North Pole in terms of software product delivery organization. But to put the question straight : is everybody in your company good enough to use their methods ? Google and Amazon are known for their very drastic recruitment criteria and methods. How about if you have regular people (as I rate myself having worked alongside stellar developers). How relevant is your process if it can only works with PhD and the cream of the crops ?

This is, in my view, the sheer value of Lean which gives another perspective to Michael’s statement above as reported in this quote by Fuiji Cho:

Lean in IT and the population issue

Antoine then asked this second, mischievous, question, touching the nerve of the dissonance between Lean and agile : “The software development community finds agile empowering while they find Lean depressing. How would you explain that ?”.

Pierre Pezziardi believes that developers are not comfortable with problem solving as a way to develop them. This population is usually well-educated and, for them, acknowledging problems is a serious threat to their mental models. This is typically what Emeritus HBS professor Chris Argyris talks about in his famous paper Teaching smart people how to learn (a problem even more complicated in French culture, refer to this interview with Peter Gumbel [FR]).

I remember Michael Ballé telling me the problems he encountered while leading a lean transformation in a small company doing both hardware and software : the problems were only with the software development team. In other word, having a population of operators to buy into lean and its problem solving based development method is much easier than with a population of highly graduated software engineers.

Struggling with the Creative Ethos

I then asked the question about Lean Start-up : How would you explain Eric Ries succeeded in diffusing Lean principles to the IT community in a year while the lean community failed during 20 ? Just like with the previous question we could tell the panelists were not really comfortable with it, one of them even rephrased it in something completely different.

Hakan Forss brought a splendid answer : Eric Ries has found the language that resonates with the agile community.

My take : for the developers community, Agile and Lean Start-up are a sexy destination. Lean is not. Agree, we are miles away from the real question. But we need to work this one out to pass through the cultural barrier. We need to understand this community, their vision, needs and culture if we want to be in a position where they just be willing to hear the real question and try to think about it.

Lean has a manufacturing culture, which looks very corporate (and depressing for developers as Antoine said). All the while the agile community produce virtual products and services, many of the developers don’t even have a car and are not interested in understanding the magnitude of the problem Toyota solved ! There is a huge cultural gap here if you ask me.

Richard Florida has identified the creative tech oriented community culture as coming from what he calls the Creative Ethos : the intersection of protestant work ethics and the hippie counter-culture. This is what resonates with the agile community and this is why Apple, Google, Facebook or Lean Start-up fascinates while the Lean community struggles just to be audible.

Dan T Jones and Steve Bell are probably the most active in trying to bridging that gap, I’m not sure whether the rest of the community fully appreciates it.

The specific issues of the IT industry

Beyond the population culture, I can see two other topics at the very heart of the IT industry that, in my view, are overlooked by the Lean community.

First, the capabilities of the material we’re using in IT is improving twofold every 18 months (Moore’s Law). I’m not sure this is a constraint of manufacturing industries. As a result there are many disruptive technologies services and products that appear on the market on a regular basis : mobile, cloud, social, big data, location based services … you name it. So I’m wondering if you can think in terms of standardisation the same way (great tweet by Hakan Forss on that subject). On the other hand, it makes all the more relevant to adopt Lean to develop resilience amongst team.

Second : it is a very different thing to sell millions of instance of one product (say a car) than having millions of users sharing one instance of the same service (Facebook, Google, Twitter …). This raises awareness about networks related concepts such as complexity, emergence etc … In my view, that makes it very difficult to make it right first time and to anticipate the use of the product by the customer.

Agile as a bridge and a lever

So how to position Lean IT alongside Agile ? The panel agreed on the necessity to have both to work hand in hand. (A view shared by James Sutton – thanks to Joakim Sunden for the link).

All in all, I think that the Lean community should see the agile’s one as an opportunity as opposed to a threat (or a competitor) as I sometimes feel it is perceived.

I observe many clever people evolving from Agile to Lean (and I haven’t seen any going the other way round) which ends up enriching both worlds. I am quite fascinated with the journey of people like Henrik Kniberg, Hakan Forss, Craig Larmann, Regis, Antoine or companies like C&IT moving into that direction.

Lean benefits from a very strong image as a virtous management method. I observe many initiatives in the IT community built around Lean principles : Lean Software Development, Lean Start-up, Lean UX, Lean Architecture, DevOps etc … But this looks more like cherry picking than really having a master plan.

I see Lean as the way to scale agile to the whole organisation and this is why I am glad I joined the Lean community. Our toughest challenge in the IT world today is to market this management practice so that it gets the attention it fully deserves and we can leverage the agile community for Lean to become the de facto approach to lead IT organisation. A massive challenge ahead of us.