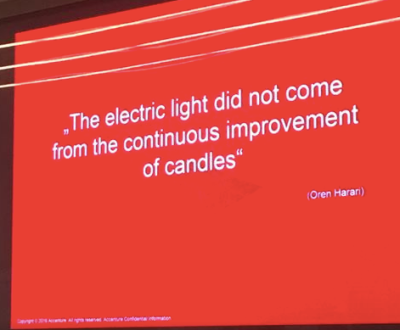 This blog post comes as some reaction to a quote of Oren Harari by Alexander Kluge (the business consultant, not to be confused with the philosopher / director), a quote reported by my friend Hans-Juergen Sturm. OK it’s not first hand yet it is rather interesting.

I haven’t seen the full presentation reported by this picture by Alexander, yet I can recognise the same petite musique, the same belief as the one in Aaron Dignan talk at USI 2015 where consultants draw an opposition between operational efficiency (the home of continuous improvement) on one hand and adaptability on the other. As if they were not compatible and one has to choose between one or the other.

There are many flaws in that opposition and here is why …

“After we had conducted thousands of experiments on a certain project without solving the problem, one of my associates, after we had conducted the crowning experiment and it had proved a failure, expressed discouragement and disgust over our having failed to find out anything. I cheerily assured him that we had learned something. For we had learned for a certainty that the thing couldn’t be done that way, and that we would have to try some other way.”

This quote above comes allegedly from  an interview with Edison that was published in the January 1921 issue of American Magazine. A quote that is sometimes shortened as follows (not yet clear as to whether it is apocryph or not) :

Which tends to disprove the quote illustrating this post : Edison did not “radically” invented the light bulb. Actually he didn’t even invented it as incandescent lamps have been around before he started working on it. He and his team worked endlessly on continuous improvement and experiments (woops) to make it commercially viable. Which is Schumpeter definition of innovation (“introducing an invention in a social system“).

This endless experimental work based on test and learn also is illustrated by another famous quote by the big man :

An idea I also read in XXth century genius novelist Vladimir Nabokov essays. An idea that makes many “radical thought-leaders” and innovation consultant uncomfortable : some of them even try to rewrite the whole thing in embarassing efforts.

The inconvenient truth is this : there is no silver bullet, no “radical management” or “innovative approach” that will, all of a sudden, make your company more innovative. There is just hard work. In the right direction, in the right context, solving the right problems, while making sure obstacles and impediments are removed for the team to thrive. Yet, nothing but hard work : this is the #1 takeaway of Scott Berkun essay Myths Of Innovation.

Why is this an inconvenient truth ? Because what these consultants sell (Steve Denning, Gary Hamel, Aaron Dignan …) is revolutionary moments. I also used to be quite fascinated with their ideas. As Matthew Stewart explains in The Management Myth) :

“It isn’t a new world order that management theorists are after; it’s the sensation of the revolutionary moment.”

They just don’t want to see their contribution reduced to the 1 percent of inspiration. Which is understandable : that is not a very solid business model, is it ?

Continuous improvement is all about small steps. Carried out on the shop floor, where the value is created, not in executive offices presenting slides.

As Michael Ballé said : 100 improvements of 1% are much better than one improvement of 100%. First because 100 improvements of 1% give a cumulative improvement of 270% (maths are intractable : these are radical changes). Second because, as Edison quote above explains, it offers 100 opportunities of learning to the organisation. Not learning as “watching a TED talk of a radical management thought leader telling you the same WL Gore / Morning Star / Google / Airbnb story”. Learning as testing and building validated knowledge while understanding the outcomes of an experiment, on the job. Third as it allows to distribute innovation efforts throughout the organisation : talk about strategy.

Most importantly, continuous improvement, carried out every day throughout the organization deploy a practice and a culture of problem solving : it becomes a way of thinking. This way of thinking becomes essential when the organisation has to come quickly with innovations. A fantastic story is the one of the Aisin plant story with Toyota.

“The fire incinerated the main source of a crucial brake valve that Toyota buys from Aisin and uses in most of its cars. Most Toyota plants kept only a four-hour supply of the $5 valve; without it, Toyota had to shut down its 20 auto plants in Japan, which build 14,000 cars a day. Some experts thought Toyota couldn’t recover for weeks. But five days after the fire, its car factories started up again. Only recently have Toyota and its suppliers revealed how they did it.”

The fact that the company who put continuous improvement at the core of its culture and practices also is the leader in hybrid engine with the Prius (a car they developed from scratch in 18 months when most manufacturers take 24 to 36 months) and with the first hydrogen fuel cell vehicle also tends to make the initial quote of this post rather irrelevant.

So what is your strategy for “disruptive” innovation : centralized with slideware and storytelling for executives or distributed practices throughout the organization and hard work ? Do yourself a favor : take a look at Myths of Innovations before answering this question.